Historically scientific materialism (that includes particles) is as a result of struggles between science, the church and the state; at it’s heart it was political.
Wiki says: “The Invisible College has been described as a precursor group to the Royal Society of London, consisting of a number of natural philosophers around Robert Boyle. It has been suggested that other members included prominent figures later closely concerned with the Royal Society; but several groups preceded the formation of the Royal Society, and who the other members of this one were is still debated by scholars.” https://en.wikipedia.org/wiki/Invisible_College

The Invisible College was a group of alchemists led by Robert Boyle (Wiki above calls them natural philosophers) who met in secret to avoid the attentions of the church. Members of the same group became the Royal Society but as time went on a rule of the society became strict avoidance of all things that hinted of the mystical and this for them included Alchemy. However some members secretly continued their hermetic studies and practice, these included Robert Boyle, Isaac Newton and most likely Francis Bacon who was very secretive. The chemistry of Boyle and the physics of Newton both undoubtedly found their origin in Alchemy.

Having taken much of their scientific knowledge from Alchemy, becoming The Royal Society meant that members were back under the aegis of the church, not to mention the king, and not wanting to include religion or mysticism in their science they had nothing but materialism to work with. Thus, after three hundred plus years have passed no changes have been made and a materialist philosophy persists to this day with certain taboo subjects being referred to as pseudoscience. It’s from this materialist extremist background that the particle arises, the modern equivalent of Greek atomism. The idea seemingly being there has to be something physical ‘hard/matter’ to work with. However, quantum physics tends to see subatomic particles as being structureless and wavelike, made of… “nothing” as far as physics is concerned! See below

Notes: Even though Alchemy was the protoscience of modern science Wiki sees fit to list it under “Pseudoscience”.
Wiki:“Distinguishing scientific facts and theories from pseudoscientific beliefs, such as those found in astrology, alchemy, alternative medicine, occult beliefs, and creation science, is part of science education and scientific literacy.”
It also needs to be mentioned that many of the old alchemists claimed support for the Christian church – to save their own skins -, but I seriously doubt it’s possible to be an alchemist and a Christian at the same time.

Protoscience
Wiki is confused and contradictory: “The term prescientific means at root “relating to an era before science existed”. For example, traditional medicine existed for thousands of years before medical science did, and thus many aspects of it can be described as prescientific. In a related but somewhat different sense, protoscientific topics (such as the alchemy of Newton’s day) can be called prescientific, in which case the proto- and pre- labels can function more or less synonymously (the latter focusing more sharply on the idea that nothing but science is science). (ups’)“ https://en.wikipedia.org/wiki/Protoscience

Wiki: “Materialism is a form of philosophical monism which holds that matter is the fundamental substance in nature, and that all things, including mental aspects and consciousness, are results of material interactions.“
https://en.wikipedia.org/wiki/Materialism

Science can’t prove any of the above because it is freely admitted only 4% of the universe is observable – according to physics. 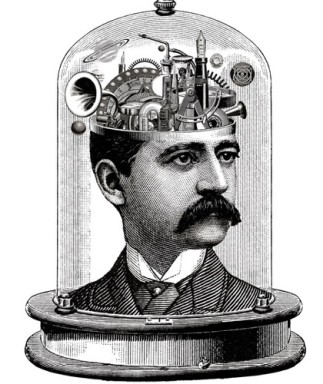 Wiki: “For the sciences, application of methodological reductionism attempts (an) explanation of entire systems in terms of their individual, constituent parts and their interactions. For example, the temperature of a gas is reduced to nothing but the average kinetic energy of its molecules in motion. Thomas Nagel speaks of psycho-physical reductionism (the attempted reduction of psychological phenomena to physics and chemistry), as do others and physico-chemical reductionism (the attempted reduction of biology to physics and chemistry), again as do others. In a very simplified and sometimes contested form, such reductionism is said to imply that a system is nothing but the sum of its parts. However, a more nuanced opinion is that a system is composed entirely of its parts, but the system will have features that none of the parts have.” https://en.wikipedia.org/wiki/Reductionism

I doubt that smashing a mobile phone to a million pieces is going to tell you anything about how the phone works, but this is the principle upon which particle physics is based. Particles are driven together a very high speeds and smaller particles cascade out of them. It is assumed that the smaller particles will tell a story about the larger particles and the workings of universe as a whole.

So what is a particle?

The term ‘particle’ is rather general in meaning, and is refined as needed by various scientific fields. Something that is composed of particles may be referred to as being particulate. However, the noun ‘particulate’ is most frequently used to refer to pollutants in the Earth’s atmosphere, which are a suspension of unconnected particles, rather than a connected particle aggregation.” https://en.wikipedia.org/wiki/Particle

A particle can be anything science wants it to be.

What is a quantum particle?

See: https://www.quora.com/What-is-a-quantum-particle-1
No one but Quora has ventured to answer this one but a quantum particle is a subatomic particle.

What is a subatomic particle?

According to Wiki : In the physical sciences, subatomic particles are particles much smaller than atoms. The two types of subatomic particles are: elementary particles, which according to current theories are not made of other particles; and composite particles. Particle physics and nuclear physics study these particles and how they interact. The idea of a particle underwent serious rethinking when experiments showed that light could behave like a stream of particles (called photons) as well as exhibiting wave-like properties. This led to the new concept of wave–particle duality to reflect that quantum-scale “particles” behave like both particles and waves (they are sometimes described as wavicles to reflect this). Another new concept, the uncertainty principle, states that some of their properties taken together, such as their simultaneous position and momentum, cannot be measured exactly. In more recent times, wave–particle duality has been shown to apply not only to photons but to increasingly massive particles as well.
Interactions of particles in the framework of quantum field theory are understood as creation and annihilation of quanta of corresponding fundamental interactions. This blends particle physics with field theory.
https://en.wikipedia.org/wiki/Subatomic_particle

Wiki also tells us with confidence that the speed of  gravitational field propagation is the same as light speed. If this were the case the universe would fall apart due to the delay in light speed gravity within and between galaxies. (I believe there are doubts among scientists about this one)
See: https://en.wikipedia.org/wiki/Speed_of_gravity
Everything in space is in orbit about something else, everything describes a spiral motion due to the orbit and its movement through space. It is therefore necessary that everything is connected by the force that holds them in orbit – gravity at light speed is too slow for the job. At light speed it would take about two million years to reach Andromeda the nearest galaxy. By which time Andromeda would be far away from its original position resulting in universal chaos.

What is a field? 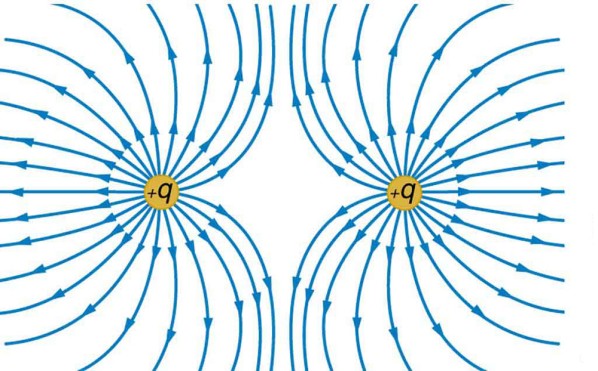 Wiki: “In physics, a field is a physical quantity, represented by a number or tensor, that has a value for each point in space and time… As another example, an electric field can be thought of as a “condition in space” emanating from an electric charge and extending throughout the whole of space. When a test electric charge is placed in this electric field, the particle accelerates due to a force. Physicists have found the notion of a field to be of such practical utility for the analysis of forces that they have come to think of a force as due to a field.” https://en.wikipedia.org/wiki/Field_(physics)

In other words a field is undefined. For a more sensible explanation see: Dielectricity & Capacitance

Physics sees fields as being mathematical constructs as opposed to the reality of an electrical circuit – be it in the lab’ or out in space. Astronomy following the lead of physics, insists that field interactions in space are magnetic when every school kid knows that you need an electric current to produce a magnetic field (that is if there are no bar magnets in space).

What are subatomic particles made out of?

“The quick answer is ‘nothing’. All so-called ‘particles’ of Quantum are deemed to be zero-dimensional. They have no body or structure or radius or size. That’s one reason you will never see a picture of a ‘particle’ in the Standard Model.

The particle mathematicians at places like CERN and SLAC excuse themselves alleging that they cannot see what any of the ‘particles’ they accelerate look like. And then again they constantly boast that they have taken pictures and/or filmed: electrons, atoms, gluons and quarks during collisions, etc.

The punchline is that not one mathematician on Earth can draw an atom for you! I mean, if we have filmed the electron and made images of individual atoms ( IBM (atoms) – Wikipedia ), you would think that, as a minimum, the particle mathematicians would be able to draw a simple hydrogen atom.

All mathematicians at any high school or university in the world draw this during their classes:

Now… ask any particle mathematician on Earth if that is the hydrogen atom and he will deny it. The official answer is that you have to take an advanced college course in Quantum Mathematics if you really want to know what a discrete electron bead standing next to a discrete proton bowling ball look like when they’re together. You need to be ‘conditioned’ properly to understand what they’re talking about.

Now… what does a wave function look like? Please draw ‘it’.
https://www.quora.com/What-are-subatomic-particles-made-out-of

What is wave-particle duality 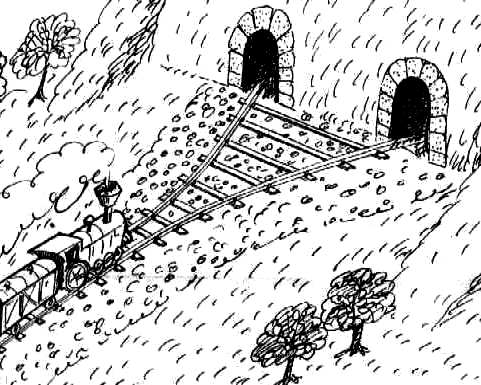 Wiki: “Wave–particle duality is the concept in quantum mechanics that every particle or quantic entity may be partly described in terms not only of particles, but also of waves….Although the use of the wave-particle duality has worked well in physics, the meaning or interpretation has not been satisfactorily resolved.”
https://en.wikipedia.org/wiki/Wave_particle_duality_Both-particle-and-wave_view

Wiki, Applications: “Although it is difficult to draw a line separating wave–particle duality from the rest of quantum mechanics, it is nevertheless possible to list some applications of this basic idea.

Wave–particle duality is exploited in electron microscopy, where the small wavelengths associated with the electron can be used to view objects much smaller than what is visible using visible light.
Similarly, neutron diffraction uses neutrons with a wavelength of about 0.1 nm, the typical spacing of atoms in a solid, to determine the structure of solids.
Photos are now able to show this dual nature, which may lead to new ways of examining and recording this behaviour.” https://en.wikipedia.org/wiki/Wave_particle_duality_Both-particle-and-wave_view

Part 1: The Atomistic fallacy and psychosis of the so-called “electron” particle

4 thoughts on “What is a particle (physics)?”