Distance communications are carried by electromagnetic radiation – commonly by radio waves, but increasingly by light. The speed of propagation of these carriers is about 300,000 kilometres per second – the speed of light (and all other electromagnetic radiation). While this is an incredibly high speed, it already causes problems in some of our day to day communication, and as we begin to contemplate interplanetary travel, we find that the finite or limited speed of light imposes serious limitations on our activities.

The table below indicates the communication delay that occurs in a one-way transmission.

Only the first two listed above have a delay that is barely noticeable in a two-way voice conversation. On telephone calls between continents that are routed via a geosynchronous satellite, the time between when one person stops speaking and then hears the other person reply is half a second. This can cause immense confusion if the other person starts speaking before the first has finished. It can take several sentences before the confusion is finally sorted out. Two-way digital communication between machines at high data rates suffers from this problem even more acutely, and protocols must be established which prevent conflicts arising.

Communication with a future lunar base will be worse, and for voice communications will necessitate an “over to you” simplex radio communications type approach. Two-way interactive communication with any station beyond the moon is basically impossible. Although there are no manned bases currently on other planets, this delay is presently of great concern to people who send remotely controlled spacecraft to Mars. There is no possibility of detecting an incipient vehicular crash in time to do anything about it. The vehicle must thus be given a very large degree of autonomous control (eg for navigation).

If we were to ever establish colonies on planets around other stars, we can essentially forget about communicating with them. This is not to say that we couldn’t follow progress reports, but by the time we had replied, our advice would be totally irrelevant (particularly considering current political lifetimes of 3 to 5 years!). Unless of course, we manage to break the light barrier – something physics currently sees as impossible.

The SETI Record of Failure
One for the Skeptics 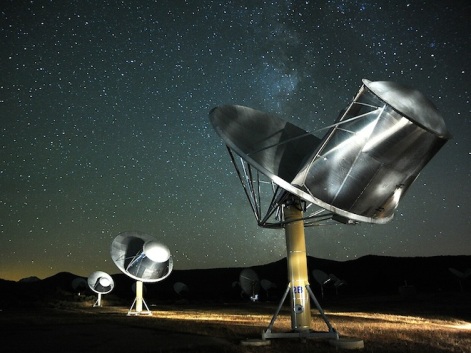 SETI is a scientific absurdity unequaled and bordering on psychopathy. The basic premise being: that it is most unlikely that we are alone in the universe. Therefore: it should be possible to communicate, or at least listen to, beings out there, who have evolved to the point of radio communications. Radio signals from aliens in other star systems is universally thought of as being perfectly acceptable to science.

We then consider the possibilities that follow from the above illogical sequence we see that if they do indeed exist, the aliens, more likely than not, will have advanced far beyond the use of radio communications because radio is too slow for planetary distances, let alone stellar distances. The assumption that they are transmitting and listening for a reply with technology unfit for purpose is ludicrous. They are also likely to have advanced far beyond the use of our primitive inefficient transport methods like rockets, and are able to traverse the vast distances between star systems. We, on the other hand are not good at such things.

Science completely loses the plot when having affirmed that aliens exist they insist they are unlikely to be zipping around in local space. As a result, anyone who claims to have seen an alien craft is called insane. It’s OK to listen for aliens but it’s crazy to look for them!
If we add to this the indisputable fact that disk-shaped objects have been seen by literally millions of people, flying in Earth’s atmosphere throughout history and also that no one on Earth has ever laid claim to them, they must be from elsewhere…out there? They can’t be imaginary because science has been listening for them for decades. So it’s OK to listen but not to see see them?

Science has done a most brilliant job of solving this one by rationalising – misidentification of swamp gas, unknown weather anomalies, meteorites, optically distorted planets and lack of scientific training etc – anything but ask about what the disks are – even with the observations of scientists, airline pilots, military and other trained observers, they are all, according to the science/sceptic community, as mad as a box of frogs! This is so outrageously bizarre, but many are prepared to risk damaging their brain by actually believing it. We have a situation where denial becomes rational, ‘they can’t be here, it’s impossible’, but SETI listens for them!

Wiki: “Epictetus, who in the first century A.D. wrote in the Enchiridion says: “Men are disturbed not by things, but by the views which they take of them.” Shakespeare, many centuries later, rephrased this thought in Hamlet: “There’s nothing good or bad but thinking makes it so.”” http://en.wikipedia.org/wiki/Rational_emotive_behavior_therapy

Anyone who sees an alien craft or even an alien, has no need to be embarrassed, since science has self-inflicted the ludicrous SETI and as a result, surrendered the high ground.
Science is no longer in a position to pass judgement on the alleged failings of others.
Click for the greatestsecret2pgsfinal

We are told that the first scientifically official attempt at listening for extraterrestrial signals was in 1960 by astronomer Frank Drake of Cornell University. There had been some earlier contacts but these have been debunked by today’s scientists. To date, there have been no contacts or even a repeatable signal. A total failure of SETI science.

(Note:the Drake Equation has not one real number to give credence to any of the variables.)

It now appears that there was an even earlier official SETI attempt, predating that of Drake:
Wiki: Nikolai Kardashev, “In 1963 Kardashev examined quasar CTA-102, the first Soviet effort in the search for extraterrestrial intelligence (SETI). In this work he came up with the idea that some galactic civilizations would be perhaps millions or billions of years ahead of us, and created the Kardashev classification scheme to rank such civilizations. Serious Russian efforts in SETI predate similar programs in the US by some years. Other notable experts in the USSR were Vsevolod Troitskii and Iosif Samuilovich Shklovskii (Kardashev’s former professor).” http://en.wikipedia.org/wiki/Nikolai_Kardashev
“The Kardashev scale is a method of measuring a civilization’s level of technological advancement, based on the amount of energy a civilization is able to utilize.” http://en.wikipedia.org/wiki/Kardashev_scale
See also: http://encyclopedia2.thefreedictionary.com/Vsevolod+Troitskii
http://www.xenology.info/Xeno/24.2.3.htm

SETI in History
In the early 1900s when there were very few radio transmitters, Guglielmo Marconi, Nikola Tesla, Lord Kelvin, and David Peck Todd, all independently claimed to have detected radio signals from space. The signals were assumed to be from Mars, mainly due to the publicity given to astronomer Percival Lowell and his Martian canal theory. Lowell reasoned that Martians had built the canals seen by many professional astronomers of the day.
Read about it here: american-rocket-society
http://en.wikipedia.org/wiki/Search_for_extraterrestrial_intelligence#Early_work
Information about David Todd can be found here:
http://en.wikipedia.org/wiki/David_Peck_Todd

Wiki: “For a time in the late 19th and early 20th centuries, it was erroneously believed that there were canals on Mars. These were a network of long straight lines in the equatorial regions from 60° N. to 60° S. Lat. on the planet Mars. They were first described by the Italian astronomer Giovanni Schiaparelli during the opposition of 1877, and confirmed by later observers…Schiaparelli made no effort to correct the supposed misunderstanding if he was aware of it. As the word “canal” can also mean “channel” or “watercourse” – not necessarily artificial – in English, the charge of “mistranslation” is unwarranted.”
http://en.wikipedia.org/wiki/Martian_canal
http://en.wikipedia.org/wiki/Giovanni_Schiaparelli

It’s not surprising that Mars was chosen as the place of signal origin, as at the time Percival Lowell was receiving a large amount of publicity for his Martian canals theory. He and several other prominent astronomers claimed to be observing linear, Martian, canals on a regular basis, a subject only discussed today in astronomical whispers.

Wiki: Percival Lawrence Lowell “(March 13, 1855 November 12, 1916) was an American businessman, author, mathematician, and astronomer who fueled speculation that there were canals on Mars, founded the Lowell Observatory in Flagstaff, Arizona, and formed the beginning of the effort that led to the discovery of Pluto 14 years after his death. The choice of the name Pluto and its symbol were partly influenced by his initials PL.” http://en.wikipedia.org/wiki/Percival_Lowell

The Wiki article above, lists Lowell’s astronomical achievements last, even though they would have been at number one during his lifetime. The reason may be because his Martian observations, not forgetting those of all the other astronomers of the day, were debunked by NASA Mars probes.

Returning to the signals received by Marconi, Tesla, Kelvin, and Todd: It must be said that the radio used at the time was unlike any used today. It was based on a patent by Tesla and all three of the other names above used Tesla’s design. Tesla radio was heavily dependent on a ground connection, something discarded by today’s radio designers due to changes in propagation theory. A radio of the time would appear, to today’s eyes, as being something like a radionic device… but it worked perfectly, and pioneered the radio-TV idea, enabling it to become what it is now.